Quinyx has helped Naked Juicebar to get their time back

"Since we started using Quinyx, life has been so much easier for our managers!"

- We began using Quinyx in 2014, and have been using it for all our scheduling and time recording since then. It was my sister who told me about Quinyx. She had been using it in her job and liked the simplicity in the solution.

- We used to make many mistakes by doing our scheduling in Excel spreadsheets. It would take entire days to put the schedules and time records together. As we expanded, it was taking more and more time to schedule the juice bars. Since it was so hard to puzzle everything together, our employees got the schedules two weeks in advance and the goal was always to give them their schedules 3 to 4 weeks in advance so it would be easier for them to see when they are working.

- Since we started using Quinyx, life has been so much easier for our managers!

When you were creating manual schedules, how often would they get changed?

- All the time! One of the major things that annoyed the employees was that they did not know who they would be working with since the schedules would always be changing.

And what if someone was sick or didn’t come in for work?

- We had to send a text message, send an email or give them a call and give everyone a hard time to try and get the shift filled. After having implemented Quinyx, it’s done with the click of button.

How has using Quinyx affected the roles of the store managers?

- The store managers are now looking after scheduling and recruiting themselves. They like the fact that Quinyx has given them more responsibility, and that it's a user friendly solution that empowers them. We have about 10 employees per bar so they have a good number of employees to look after.

- They really enjoy using Quinyx. We had a half day session to go through how it works and that’s all it took. We’re using Quinyx in the office for the higher level functions, like time reporting, and we find it just as easy to use.

What impact has Quinyx had on the stores?

- It gives the store managers a much better overview of their store and much more freedom for the employees. It’s been a hugely positive impact. If someone wants to work 7 days a week because say, they are planning a trip abroad, then they can do it much more easily than before. And now we can easily schedule a month in advance.

And what about the business as a whole, what impact has Quinyx had there?

- Well business is good! And one thing we can say for sure is Quinyx has saved us so much time and of course, a lot of costs. We’re just about to start using even more of Quinyx’s functionality, particularly for our budgets and our forecasts, and can’t wait to see the additional impact it will have.

So what do you do with the extra time you’ve gained?

- It makes us focus on the bars, the bar managers, the staff and marketing because we now have time to do it. Of course we never have enough time but we have so much more than we did previously.

What do you get passionate about and what do you enjoy about your work?

- We love the product and we’re so proud of it. The smoothies and the juices are the best! When we started 8 years ago it was only us doing it. It’s good to know we were one of the first. However, with more competition it means that we always have to work on the product to make sure it gets better and better. The plan is to have 75 bars in Sweden and to open 5 or 6 a year. Quinyx is one of our critical success factors to succeed with our expansion. 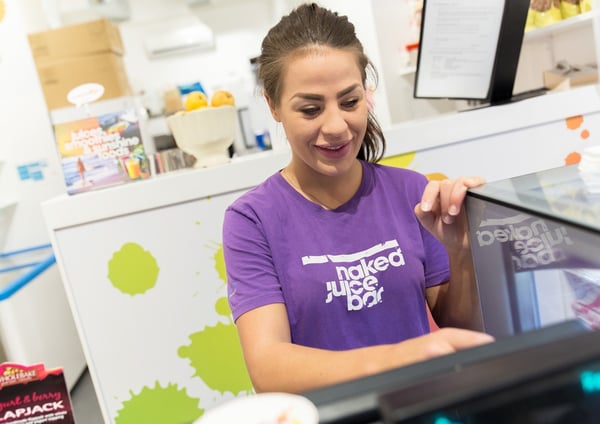 Quinyx has helped Naked Juicebar to get their time back. It saves them time, direct costs and by using it, they can spend more time growing their business, develop their product and enjoy work.

Naked Juicebar serves juice and smoothies made from high quality ingriedients and has 25 bars throughout Sweden.

In their words, not ours, Naked Juicebar is the story of when ‘plump Australian mangoes met and fell in love with crisp Swedish berries.’ It’s the story of Steven Collyer, Maria Wirén, their friends and their vision and passion to create a juice and smoothie bar built on love.

Juices and smoothies are everywhere, but back in 2007 when the first Naked Juicebar opened they were few and far between. Naked Juicebar set the trend that others now follow. With incredible natural ingredients, a fun team and a sense of innovation, Naked Juicebar has grown to 25 juicebars throughout Sweden, with plans firmly in place for further growth.

Their success is built on a love of their work, which is just one of the many reasons Quinyx and Naked Juicebar have become the perfect blend.

We paid a visit to their bar on Kungsgatan and then their head office and met with Hanna Eliasson and Cornelia Bogdon from Naked Juicebar, to see the impact Quinyx has had on the way they manage their business.

Since we started using Quinyx, life has been so much easier for our managers!
Hanna Eliasson and Cornelia Bogdon
Naked Juice bar

Elkjøp Nordic, part of the Dixons Carphone group, is the largest Consumer ...

Local managers can quickly create efficient schedules for their respective ...

GANT has reduced the average time for scheduling planning and follow-up process ...